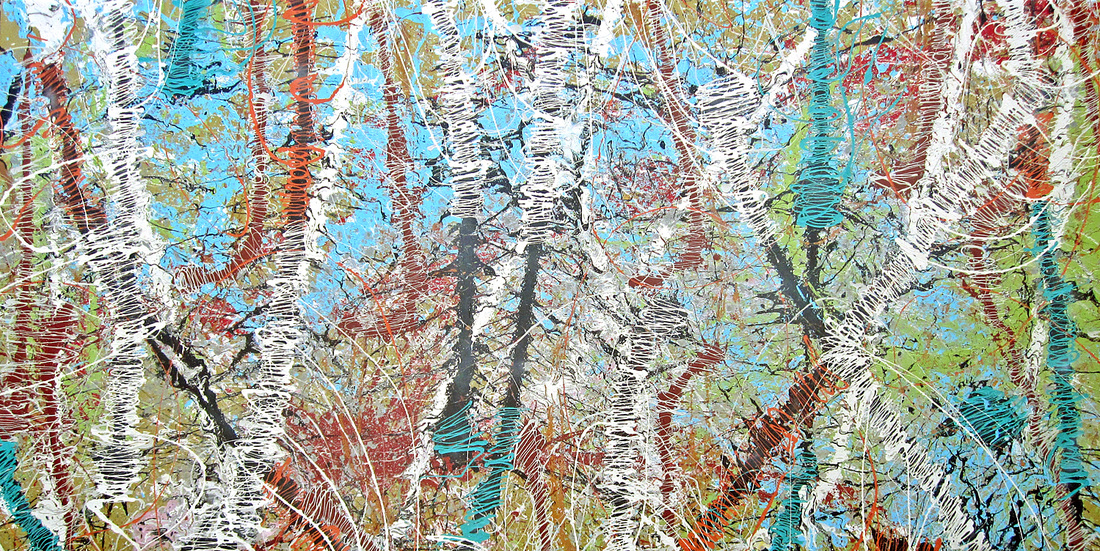 (Austin, Texas)  November 3, 2013 – Austin-based artist Taylor Winn adds art to the list of things that are bigger in Texas with his upcoming solo exhibition, Taylor Winn  XL Paintings (November 15, 2013 – February 3, 2014) at the venerable Bass Concert Hall on the University of Texas campus. Inspired by the physical approach to painting ushered in by post-war Abstract Expressionists, Winn began in 2005 to develop his style of highly gestural, large-scale, abstract panoramas ranging to 10 feet tall and 16 feet wide.  In 2012, Austin Art Boards selected Winn’s painting, On the Lake, for a two-year rotation around Austin as a 14 x 48-foot billboard. In November, the artist pulls up to Bass Concert Hall in a 22-foot truck to deliver a fresh crop of giant, kaleidoscopic canvases completed in the last two years.

The action contained in Winn’s paintings prompts the viewer to consider the logistics involved in creating each work. Drawn from nature, history and memory, Winn’s abstract wonderlands conjure large environments – from Tarzanesque jungles of swinging vines to vast bodies of water. The artist’s unconventional manipulation of paint pairs with a novel sense of color for maximum effect. A distinctive signature of Winn’s work is the coiling, vine-like calligraphy, usually white, entwining the usually high-gloss black linear elements which traverse the surface of the works.

Winn explains, “I don’t use a brush and never actually touch the surface of the work beyond rolling on the ground color at the outset.  After applying paint from above and around the perimeter of the work, I’ll respond quickly to reactions in the wet stage to see what effects can be achieved or go back in and build on results after reactions have settled.  I set out to produce cracking, bubbling, pigment migrations and oil slicks on the surface but there are always discoveries which keep the process fresh."

ABOUT TAYLOR WINN:  Montessori and Waldorf educated through grade school, Taylor Winn focused on art at an early age, sold his first paintings at age 17 and received his BA in Studio Art from the University of Texas at Austin.  Winn’s early paintings were analyzed by researchers at Stanford University, Menlo Park and Stony Brook University in published studies (2009, 2011) on fractal analysis authentication of Jackson Pollock’s works. For two consecutive years (2005, 2006), he was the Juror’s Prize recipient of The Austin Contemporary Jones Center Ahead of Their Time  exhibition.  Taylor Winn XL Paintings is the artist’s second solo alumni exhibition on the University of Texas campus. More info at www.taylorwinnart.com.


To request info or images for publication, contact: info@taylorwinnart.com.